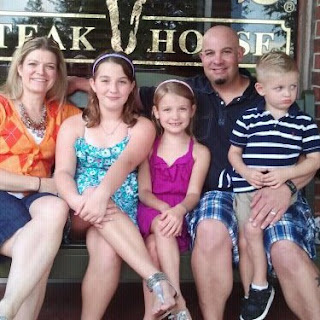 My name is Katie Crockett. I have been married to Dan Crockett for 13 years and we have 3 crazy kids, Kaitlyn – 11, Chloe – 8 and Kyle – 4. I am a registered nurse and have worked in the Cancer and Hematology Center at Texas Children’s Hospital for 13 years, and I love what I do. I have not gone through major struggles as some who have written on this blog and don’t have a lot of major life “things” to tell about, but what I can say is that throughout my life God has always been there and has guided me whether I knew it or not. So here is my life story…

It all started with my Mom having me at the age of 17. She sacrificed so much in order to provide for me (and I will forever be thankful because I am the person I am today because of her love and sacrifice). She did not tell her mom (my Nana) until she was 14 weeks pregnant and she never considered abortion even though it was an option she was given. That was the beginning of God protecting my life. Once she began to show she had to do homebound schooling (it wasn’t cool or accepted to be pregnant in high school back then). My Nana and Papa supported her, but my biological father’s family was not supportive at all and actually bribed him with a new truck to cut things off with my mom. Again, God was protecting me because my life would have been VERY different if my Mom and he had stayed together. Mom returned to high school for her senior year and graduated with me by her side. When I was two, Mom married Kenny Farmer and when I was almost 4 he adopted me. This was and is a huge blessing and more evidence that God was part of the plan all along. I may have a biological father out there (and I have had some contact with him), but Kenny is my daddy and that will never change.

I really never dated in high school other than a few “boyfriends” that were never very serious and didn’t last long. I think this was another way God was protecting my heart. In December 1997, I was set up on a blind date by a friend of a friend. Dan and I talked on the phone for the first time on a Monday and by Friday (on our third date) we were talking about marriage. He was living in Austin at the time and we thought he would stay there until I finished nursing school and then we would get married and I would move to Austin. After our phone bill was close to $500, Dan quickly moved to Houston (Ha!). We were engaged in April 1998, but did not marry until June 2000. I do not really encourage this if you are saving yourself for marriage (Just sayin’ ). But those were the rules if I wanted school and a wedding paid for.

Dan is a survivor of childhood leukemia and we were told that he would likely not be able to have children of his own. We knew that we wanted kids, but were not sure if it would be possible to conceive. Here goes God again, my aunt is a foster parent and I was always going to love on the babies in her home and after trying for a little while to conceive I started to see what Dan thought about adopting. Well in September 2001, Aunt Donna brought a new baby home straight from the hospital and I just had to go see her. It was love at first site, but I needed to convince Dan. So I asked if I could take her home and “babysit”. Well, needless to say it was love at first site for Dan as well and he asked “how can we adopt HER?”. So we started the process of becoming foster parents. This is not really how it works, you don’t become foster parents and request a certain child, but once again God was working out things before we could even begin to work them out on our own. Kaitlyn was born with drugs in her system and her mom was HIV positive because of prostitution. So, there were medications and doctor’s appointments and waiting on lab results to see if she was going to also be HIV positive, but once again God was there because Kaitlyn’s biological mom was on her medication while she was pregnant and when Kaitlyn was 13 months old her blood test came back negative. In October 2002, Kaitlyn was placed in our foster home and we finalized her adoption on September 12, 2003 (just 8 days before her 2nd birthday). This whole process was extremely stressful, but we could feel God’s presence throughout.

Low and behold, just one year after we finalized Kaitlyn’s adoption I found out I was pregnant with Chloe (shocker!) and we had done no fertility treatments (we were actually about to start that process). The thing that is so awesome about this is that if I had become pregnant before Kaitlyn’s adoption was finalized everything would have been put on hold and she may have been taken out of our foster home. Once again God was there guiding our lives. After having Chloe, we were kind of the thinking that if we had another great, but we were happy with two girls. I told myself that if I was not pregnant by 30 that that would be it and Dan would get the “snip” and we would be done. Well God is kind of funny and two months after I turned 30 I was shocked to find I was pregnant with Kyle. This was completely unexpected (evidenced by the fact that I had just gotten rid of ALL things baby and maternity because we were done), but so exciting!

So there we were with our family of 5 and living life. Dan had been working for Southwest Airlines for almost 20 years. He made a good salary, had great benefits and a nice schedule and then he hurt his back in August of 2010 and had to have surgery. He was out of work for 9 months, but we were taken care of because like I said SWA had great benefits and nice worker’s comp. He returned to work in May 2011, but re-injured his back in July 2011 and ended up having to have surgery again. He had also had shoulder surgery related to a work injury, several concussions, and had been struck by lightning while at work. You would think that would be enough to make you quit, right?? Not Dan, he absolutely did not want to do something else because working on the ramp is what he had always known and he did not think he could possibly go to school for anything else. I had tried to convince him for years to do something else, but he was not going to do it. Well, once again God was working and did a much better job of convincing Dan than I ever could. Dan officially resigned from SWA in March of 2012 and went to pharmacy technician school. He made the Dean’s List both semesters and graduated in August 2013. He is now working at Texas Children’s and loves what he does (and it is so much easier on his body ).

So, here we are living the life and loving every minute (well almost every minute…)! That’s my life, nothing too extraordinary, but God has always been there and I know that He always will be. My life verse is Jeremiah 29:11-13 and I truly believe it has been played out in my life!