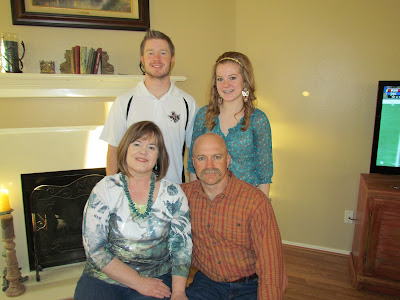 Since we are new to Crosspoint and many of you don’t know me, I thought that I would introduce myself and tell you about the major life-changing event that shaped my spiritual life. My name is Karen Mayfield and I have been married to Mark for 15 years. We have two children, Trent (24) and Caroline (14). I have worked for Family Services of Greater Houston for 16 years as their controller. In my free time I love to read, scrapbook pictures that I take of my family, and plan family outings and vacations.

I grew up in Clear Lake and was raised Methodist. My family was sporadic in attending church during my childhood. When I was a freshman at Texas A&M, I started dating Scott. He was raised church of Christ and I started attending church with him. We got married the summer before our senior year. We weren’t active at the church we went to and didn’t go every Sunday. After we graduated we moved to Longview, his hometown. Once we were there we started going to church every Sunday but honestly, it was because we were going to the same church his parents were going to and we were afraid of what his dad would say if we didn’t go. As time went on I was glad we were there because I was making friends and I did start to enjoy the Bible classes. Three years after we moved there God blessed us with a baby boy – Trent.

Right after our 6th wedding anniversary I found out that Scott was having an affair with a woman that he was working with. I was devastated when he decided to move out a few days after I found out. I wasn’t working and Trent had just turned 11 months old. I had no idea how I was going to support myself and my son, and I was scared to think about raising my son by myself. This is the event in my life that made me so aware of how our Heavenly Father takes care of us. I found out how important it is to have a church family and Christian friends that will take care of their own. I spent hours of my day in prayer and searching scripture for words that would help me through the tough times. For months the prayers were that God would send Scott back to us. When it became evident that that wasn’t going to happen I started praying that a good Christian man would come in my life so that I wouldn’t be alone. This is when I learned the lesson of it will be God’s timing and not my own. I was a single mom for 8 years!

Fast forward to four years after my divorce. After much thought, discussions with my family and many prayers I made the hard decision to leave Longview and move to Houston. I would be near my family, have better job opportunities and have bigger churches with singles groups. On our first Sunday in Houston, Trent and I visited the Memorial Church of Christ. I met a man named Mark Mayfield. 4 ½ years later (3 years of being friends and 1 ½ years dating) we were married. He was the answer to many prayers. He loves God, he loves me and he promised to love my son as his own. When we married, we hadn’t decided if we were going to have children of our own or not. I wasn’t sure that I wanted to start all over at the age of 36. Mark told me that we should pray about it and he would be fine with whatever happened. God took care of the decision for us and blessed us with a honeymoon baby – Caroline.

Every time I’ve made a hard decision that I’ve prayed about, God has blessed me beyond what I could have ever imagined. The most recent was last April when we decided to leave the church that we had gone to for 14 years. It was a mutual decision between Mark, Caroline and me. All three of us are thrilled to be a part of the Crosspoint family and I am so happy to be serving on the Crosspoint Women’s Team!